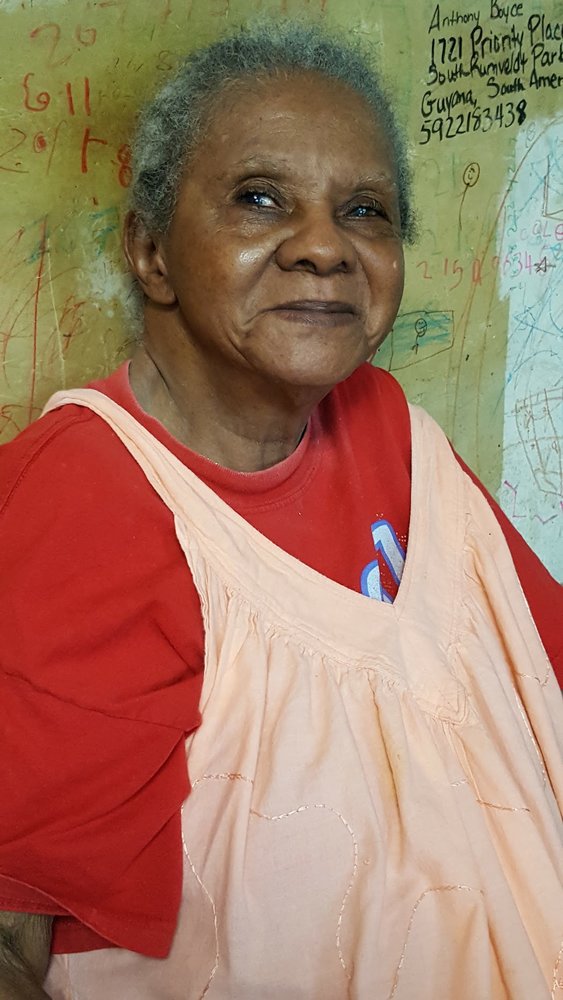 M OLLY ADALAIDE CAVE (née Boyce) was born on January 25, 1930 to Elvira and Samuel Howard Boyce in Georgetown, Guyana. She was educated in Saint Ambrose Anglican School, and knew underclassman Lance Gibbs, who would become a famous cricketer in Guyana and the West Indies. Another alumnus of Molly’s school was cricketer Clive Lloyd, who was a cousin of Lance Gibbs. Molly was loving and generous, the quietest amongst her sisters, and always seeking to live an orderly and peaceful life. To her children and
grandchildren, she was mummy; to everyone else, she was auntie Molly.
On December 26 1953, Molly was united in holy matrimony to Samuel Joseph Cave, and eventually moved from Georgetown to Linden. She raised her children on love and always opened her doors to strangers passing through. Educating her children was a priority. Molly would iron and starch her children’s clothes and send them off to school looking spick and span. She kept a respectable and clean house, constantly waxing the floor until it shone like a diamond. Molly was the best cook known to us, whether she was preparing a traditional Guyanese dish, baking bread
or pastries.
Molly immigrated to the United States in February 1984 and settled in Brooklyn,
New York. She entered the workforce as a domestic aide and saved most of her earnings. Soon after, Molly filed papers with the U.S. Immigration Services to bring her husband, children and grandchildren to America. She paid their passage and provided them with a home to live until they were able to obtain a place of their own. Although many of the children left the “nest,” they continued to rely on Molly to look after their children while they were at work. Some of those grandchildren grew up in the steps of their parents. One could say that Molly’s home was like a daycare, filled with food and love. Contrary to popular beliefs, Molly did not have a favorite color; however, she did not fancy black.
Molly departed this life on September 25, 2018 in Philadelphia, Pennsylvania.
Molly was preceded in death by: her father, Samuel Howard Boyce; mother, Elvira Boyce; husband, Samuel Cave; brothers, Fitz-Herbert, Godfrey, Robert and Patrick; children, Joyce, Michael, Keith, Wayne and an unnamed still-born child; grandchildren, Quincy, Samuel and Nevaeh; mother-in-law, Susan Denney-Parks; brothers-in-law, James, David and Patrick; sister-in-law, Gladys; and son-in-law Winston Edwards.
She leaves to cherish precious memories: sons, Ulric (Carol), Lancelot (Carol) and Colin; daughters, Jennifer, Debra (Lorenzo) and Jacqueline; sisters, Jean, Elsie, Doreen and Lynette; grandchildren, Vennice, Peter, Kelwin, Maurice, Sonya, Ronnette, Coleen, Wanya and others; a host of great-grandchildren and one great- great-grandchild; brother-in-law, George; a host of nieces, nephews, cousins, in- laws and esteemed friends.
On the day Molly was last admitted to the hospital, there were four generations of her descendants present. She was deeply loved and will be greatly missed.
Sorrowfully submitted, The Family

To send flowers to the family or plant a tree in memory of Molly Cave, please visit Tribute Store
Saturday
29
September